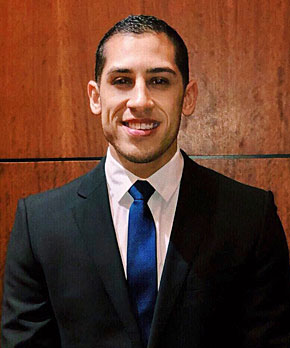 Christopher A. Dávila Rodríguez joined Indiano & Williams, P.S.C. as an Associate in February 2018.

Mr. Dávila was born in Springfield, Massachusetts and raised in Arroyo, Puerto Rico. Upon graduating high school in 2008, he received a scholarship from the Pontifical Catholic University of Puerto Rico, where he attended until 2012 and obtained a Major in Political Science and Law, a second Major in Public Administration and a Minor in Sociology, receiving the “Student of the Year Award” for highest overall GPA.

In 2015, Mr. Dávila obtained his Juris Doctor Degree from the University of Puerto Rico School of Law. While in law school, he studied a summer abroad at University of Barcelona School of Law, where he did an internship at a local law firm, gaining first-hand experience in the Judiciary System of Spain.

During his law school years, Mr. Dávila also worked as a Law Clerk at González-Ortiz Law Offices, P.S.C. After graduating law school in 2015, he began working as an Associate at said law firm, representing clients in general civil trial and appellate litigation in matters mostly related to General Torts, Labor and Employment Discrimination, and Medical Malpractice.

Mr. Dávila passed the Bar Exam within the top 93rd percentile in September 2015. He is a notary public, and is admitted to practice in the Commonwealth of Puerto Rico and in the U.S. District Court for the District of Puerto Rico.